I’m a terribly brilliant packer. I can’t bring myself to leave behind anything that might come in handy, and so I fill up suitcases, and hand luggage, and pram pockets, and last minute plastic bags with extreme precision. If you think it’s impossible to fit in, trust me; I’ll get it packed!

With this compulsion, and its associated skills, and the prospect of leaving a home full of toys and games for our sub two year old and travelling for 12 months, knowing toddlers’ preferences can be fickle and, as a first time parent, you grow with your child and can’t easily predict the year ahead’s toy needs, I packed too much. Whilst everything has been used, she actually doesn’t need many formal toys and games because of how much time is spent swimming, pouring, building sand castles, playing with buckets of rice, collections of water bottle lids, and other random sensory bits we build up along the way, or just playing in her imaginative world, either cooking and going to the shops, or making a house for her and her teddies in a cupboard. So we’ve already earmarked some toys and games to give to a few local kids before leaving for the next leg of our journey. But some of what I brought will continue to travel with us because it regularly afford us parents loads of dish washing, non-Thai food cooking, travel planning, coffee drinking, and phone zone-out time. So here are my top picks for entertainment worth carting around on travels with a two year old (give or take a few months).

Our heavy wooden baby puzzles were obviously left behind, but I managed to squeeze in a set of cardboard ones, and they’re now looking a little frayed after 3 months of good use and lots of independent play. One of my favourite coffee sipping pastimes is watching Maddy absorbed in the challenge of working out which pieces fit together and, lately, building them as quickly as possible, and then witnessing the sheer delight as she accomplishes her task, eagerly anticipating claps and cheers!

My preemptive toy research when Maddy was a tiny babe led me to Mega Blocks, which I believed would grow with her, but in reality she never really took to it. We didn’t actually have any Duplo until a few weeks before we left, when grandparents bought her a little African themed set as a gift and, since the pieces are a bit smaller and more varied than Mega Blocks, and I could envision it being a good attention drawer, I added another set of blocks to take with. Boy was that the right decision! The number of towers that have been built – and rebuilt when they topple to the floor, – the pleasure and pride that comes with trying different building techniques, and now the start of creative building and imaginative play with her constructions is well worth any suitcase packing stress!

Before being able to use words to describe specific animals, our tot used their sounds – you could name most animals and she’d make their (or at least mum / dad’s interpretation of their) sound – even a giraffe! Because of this fascination with animals, I packed her set of little plastic domestic animals, and added a new set of little wild animals. And somehow (as is the case with a slightly obsessive compulsive toddler), after introducing a game of hiding the wild animals for her to find on our first morning in Samui, that has remained the game that must be played with them. So she tootles off to wait in the bedroom (and now counts to 10, twice) while I scurry around hiding them all over the lounge, before she runs around gleefully discovering them.

Not only is it an ideal version of hide and seek that let’s you sit back and watch (coffee up in hand), rather than waiting to be found yourself, but it’s also a great game for listening skills – I might have to suggest looking on the floor behind the table, or under the towels on the couch.

It’s also one of those games that transports well, and brings a sense of comfort and familiarity to new surroundings – the animals came with us on our little trip to Koh Phangan and were hidden around the new living area each morning, and I’m sure eagerly await new hiding places across our travels.

A cheap plastic tea set is very light, but a bit awkward to pack because of the different rounded shapes. For inticing open-ended, imaginative play it was definitely worth squeezing in though (with the teapot and cups stuffed full of other little bits to minimise wasted suitcase space). Not only has she had numerous tea parties with her teddies, Sophie (who’s an attachment she’s just started growing out of, as her friendship with Ed The Ted has blossomed) and Jee-Jee (a toy cat I bought for her when we gave our real kitties away), but mum and dad have savoured countless cups of rainbow, sunshine, and green tea, from tiny cups meticulously filled with different coloured little pegs (for want of a better description for the little interlocking plastic pieces that we bought in a supermarket here; the best 25 Baht ever spent). Even family members have been offered cups of tea through the phone on FaceTime calls!

How could you forego a regular cup of imagination for a bit of extra space in your case?

‘Dawing’ is something our little tot does at least twice a day. So a pack of (vegan) crayons, perfect for little hands, made their way across the sea with us, and I picked up an A3 sketch book on our first shopping trip. It now contains a multitude of Maddy’s master pieces, along with a lot of awful renditions of bears, cats, dogs, rainbows, and attempts at beach landscapes with palm trees, drawn on request (or persistent insistence).

Not only is drawing great for developing muscle control and coordination, but it’s also a brilliant way for tots to explore their ever growing need for autonomy, as they decide which colours to use, where to draw (luckily Maddy managed to understand early on that this decision was confined to paper), and which scribbles to do, and then experience pride of their competency, as they view their own creations. I have a set of sturdy crayons at home and a mini set in my handbag, which I bring out at restaurants or immigration offices, to occupy our budding artist and limit the amount of running around we need to do.

From much younger than was reasonable to do, we read our little babe bedtime stories as part of a nighttime routine. I also saw a great tip somewhere about putting books in reachable positions for children to help themselves to, so from the moment our’s could shuffle, then crawl, and then walk to the low bookshelves, she’s pulled out hoards of books and we’ve sat together and read them. But since most of these were board books, and hence too heavy and bulky to travel with (I speak from past holiday experience), and were also becoming too babyish for a toddler with a widening attention span, understanding of the world, and imagination, I had to refrain from packing them (all but one favourite). Instead, I brought a varied selection of paperback books with fun, longer stories. 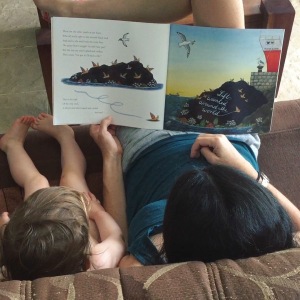 A lot of the carefully instilled routines that we followed pretty regimentally back home (to give us evenings free to recuperate from the day while the tot was tucked up in bed) have largely gone out of the window since being in constant holiday mode. We’ve effectively transformed our toddler’s sleeping habits into that of a teenager – late to bed and late to rise, with a long nap in the afternoon. But without work and other rat race routines to worry about, full family days beat childless evenings hands down. So EOD no longer follows the predictable path of dinner, bath, stories and bed by 19:45 – now showers tend to replace baths, and they happen after the last swim, often before dinner. Dinner is often out at a restaurant of sorts, and we tend to arrive back worn out from a day full of fresh air, sea, sand, sunsets, sand castles, and lots of swimming and running around, and once in a while we’re all too tired to read bedtime stories. But we now read before naps too, and the books are stacked in reachable piles around our temporary home, and not a day goes by that at least two books don’t get read at least twice each. The Page Turner chart rankings change regularly, with top spots currently alternating between “Monkey”, “Snail-a-Wale”, “Hair’ Clary,” “Party B’ower”, and “Bamboon” – I haven’t heard many more beautiful things than a little sing-song voice saying, “Bamboon says ‘go away – my pool'” when she ‘reads’ the African tale, How The Zebra Got It’s Stripes, on her own!

So, if you’re travelling with a toddler that loves reading, don’t leave your books behind. You can always stuff a good selection into your hand luggage, if you’re worried about weighing down your checked luggage allowance, and scatter them around your temporary home to ignite imagination.

So to sum up

As you might have noticed, we’re not using backpacks. Oh life would be so much easier if we could stuff in some clothes and trundle off with a backpack on our backs, but who says life has to be easy to be enjoyed? The smiles, joy and pride that come from these items make them well worth the extra packing and heaving effort.

"A mind stretched by a new experience can never go back to its old dimensions" - Oliver Wendell Holmes
%d bloggers like this: